I’ve developed a new appreciation for this. 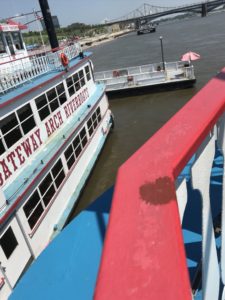 I’ve parallel parked a SUV in Manhattan with one foot to spare on either end and a parade of angry cab drivers behind me.  How difficult could it be to get a boat into a slip?

As I learned this summer, it’s the hardest part.  Unlike cars, boats are not firmly attached to the ground- you point the bow one way to dock, but the boat doesn’t necessarily stay headed in that direction, and boats don’t stop immediately when you want them to—a function of floating in water/lacking brakes.

On one particularly windy day, I spun 360 degrees in the channel as I was leaving the harbor before I got us heading in the correct direction.  Luckily, the few approaching boaters gave us a wide berth.  They also graciously waited to point and laugh until I was out of earshot.  And then there was the phase when I’d get nervous, push too hard on the throttle, and gun the engine.

Practice makes . . . better.  I’m still far from perfect.  I started to practice putting the engine into forward and reverse before heading back into the marina (for those of you who drive stick shift, it’s equivalent to getting a feel for where the clutch engages).  No more gunning the engine.   I also took Carefree’s advanced docking 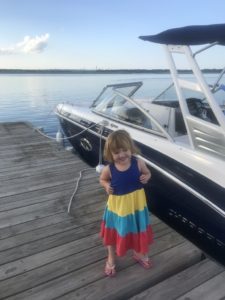 class and learned how to back a boat into a slip, as well as other useful docking skills. I’ll get there eventually—if parallel parking in Manhattan can become second nature, so can docking a boat.

And many thanks to the Carefree dock staff (especially Lou, Cliff, and Paul) for your patience and maintaining a calm façade, even during my gunning the engine phase (and, also, for saving me from a couple of near misses).  If you were thinking “What the dock!” it didn’t show.

Photo #1 was taken on the Tom Sawyer, a St. Louis, MO, riverboat.

Photo # 2 is my recent successful docking at Knapp’s Landing in Stratford, CT.